Vintage Wheels Block of the Month

Block nine is ready to post and I hope the girls like the fabrics I have used this month. For the romantic Roses kits there is  pretty pink French General fabric for the centre with dark mauve and green spokes. The Japanese blocks have a crazy patchwork styled peach/pink floral on a black background as their centre and  peach/pink and green spokes. 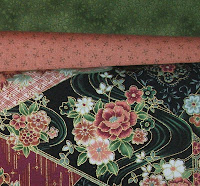 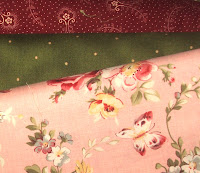 I have designed several borders that may be used with these blocks. This month the participants will get a pattern for the first of these designs with their kits as well as a sample of the fabric I used. Contact me if you are interested in purchasing this fabric for your borders. 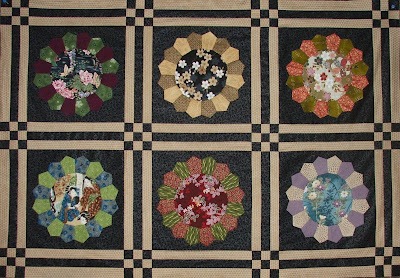 Posted by Penny No comments:

Time for some hand quilting!

There was a time I handquilted every top I made but those days are over. In the late nineties I began machine quilting most of my quilts but always had a handquilting project on the go. When my friend, Elaine started her quilting business"Quilting in the Vines" I started handing my tops to her for a quick and professional finish. It's always exciting to get the tops back from her and see how she has transformed them with amazing quilt designs I could never have done myself.
I don't want to lose my machine quilting or handquilting skills so I try and use them every now and then. The perfect opportunity for handquilting has presented itself. Only the most traditional tops that I feel deserve the time and effort are chosen for this treatment now. On my last 'very special' Birthday I received 14 beautifully hand appliqued blocks from one of my lovely Sewing Groups. I made an extra block and another friend, Sheridan made the 16th block. I now have the perfect number to put together into four rows of four blocks. I think you'll agree they are the perfect handquilting project to create an antique styled quilt. 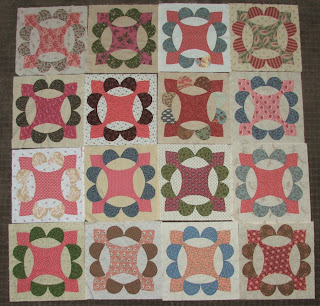 
Posted by Penny No comments: 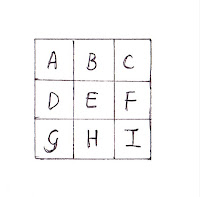 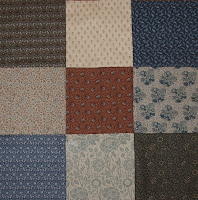 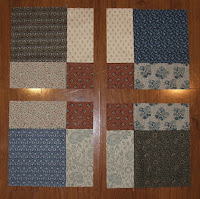 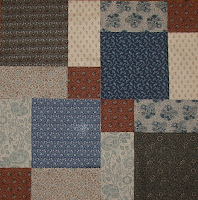 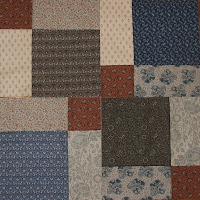 I promised some photo's of our new home so here they are. We are high up on a hill overlooking a valley. We have managed to find a home for most of our furniture. My antiques fit in quite well with the modern surroundings. 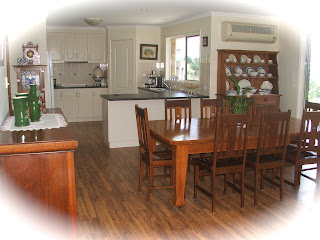 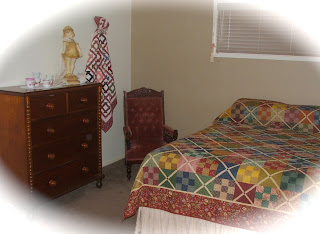 As my Vintage Wheels BOM is nearing an end I have decided to take on two new BOM's by Sue Daly.
The first is her 'This goes with that' and the Fussy-cut Club. The postie delivered the packs yesterday and last night I made my first two hexagons! 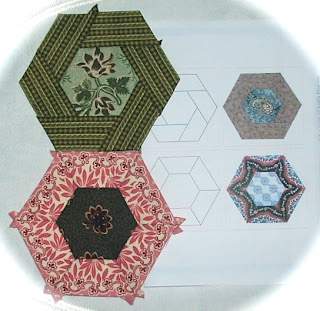 Each month you receive:
1 Pattern for 2 English Paper Pieced block designs (with papers)
1 Superior Bottom Line Thread super bob (different colour each month)
1 pack of size 11 needles
4 x Fat ⅛ th's of fabrics perfect for fussy cutting
4 x 10" squares of assorted reproduction fabrics to complement your existing stash
Over the course of the program you will also receive 8 acrylic templates.
In the first month you recieve a gorgeous pink project organiser and in month four you recieve a pattern  for a Tulip bag.

I have so many beautiful reproduction fabrics to share with participants. Stripes which are my favorites will make great secondary designs in the blocks.

The cost will be $38 a month plus postage so email me (Click on email me) if you want to join in!
Posted by Penny 1 comment:

Last Christmas I made my beautiful granddaughter , Ashlyn a bright quilt using the techniques I describe in my Japanese Garden Quilt pattern. The difference was that this was made up of multiple fabrics randomly laid out . I used at least 25 fat quarters of brights. I finished the quilt by sewing a bright pink border around the edge. Ashy knew what it was straight away and cuddled it to herself stroking the fabric. Just the reaction you want when you give someone a quilt! 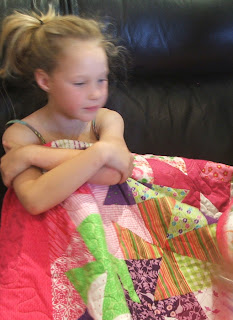 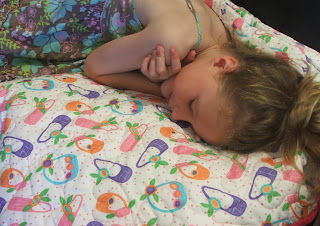 This is the original Japanese Garden pattern. If anyone who bought this wants an update on how to make the scrap version just contact me and I will email it to you.

Leaving all my family and friends in sunny Adelaide has been hard but rain drenched Queensland was calling and hubby and I decided to let God lead us in a new adventure!
I have made so many wonderful friends and acquaintances and can't believe how many wonderful gifts and cards I received as farewell presents. While Andrew received numerous baskets of chocolate, relishes and wine I received some amazing and thoughtful treasures. As this is a blog of my creative textile ventures I will show some of the beautiful handmade gifts I received. Some of my friends in the Vale are not only great Patchworkers but also dabble in machine embroidery and I was the lucky recipient of their time and talents.


Posted by Penny No comments: 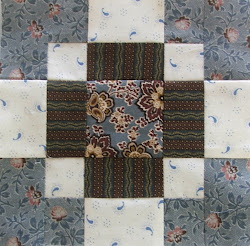 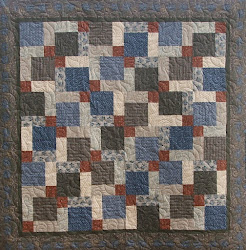 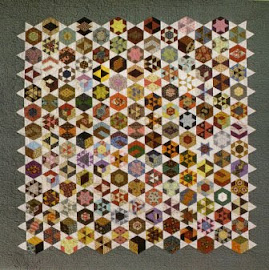